The question now turns to what color tint is the best to respond and battle light sensitivity? In this article, we’ll go over what light sensitivity is, as well as how effective each tint color is.

What is Light Sensitivity?

Photophobia, more commonly known as light sensitivity, is an eye condition where bright lights hurt people’s eyes. Light sensitivity is a common symptom of many other conditions.

For starters, light sensitivity is a common symptom of migraines. Bright lights can end up triggering the overwhelming swell of headaches that migraines bring. Apart from light sensitivity, migraines can also be caused by changes in a person’s hormones, food, stress, and changes to the environment.

Statistics say that at least 10 percent of people around the world are battling with migraines, with women experiencing them more than men.

Light sensitivity may also be due to a slew of brain conditions. For instance, if the brain is inflamed due to viral conditions, it could also induce light sensitivity. This inflammation is commonly known as encephalitis, and if it is serious, could threaten a person’s life.

Bacterial infections, or meningitis, could also cause inflammation in certain membranes around the brain and spinal cord. Apart from light sensitivity, other complications include hearing loss, seizures, and at worse, death.

Finally if there is bleeding in the brain – or a hemorrhage – it may also contribute to light sensitivity. If left unchecked though, a person could meet the end of his or her life.

The final set of reasons for light sensitivity could come in the form of a variety of eye conditions.

If the cornea, or outermost layer of the eye is injured, it could lead to the eye becoming infected and inducing various things, including light sensitivity. Injuring the cornea could happen due to sand or some sort of particle getting into a person’s eyes.

If the white parts of the eye become inflamed, this is a sign of scleritis. While this could induce light sensitivity, it also usually a more pressing sign of diseases such as lupus.

Finally, pink eye is another eye condition that could contribute to light sensitivity. This is also due to inflammation or infection of the white parts of a person’s eyes.

There are many things that a person can do to battle light sensitivity. The most obvious one is to avoid bright lights. Ensure that all lights are dimmed as to not induce any pain or inconvenience to the person with light sensitivity.

Depending on the condition that contributed to the light sensitivity, the remedies also vary. For migraines, medication and rest is recommended. For any inflammation or infection, antibiotics and other medications may also be prescribed by a doctor.

Another effective remedy is adding colored tint to a person’s eyeglasses. People may question this notion and ask what the difference is between tinted glasses lenses and sunglasses. While both of these protect a person’s eyes, there are major differences.

Everyone knows what sunglasses are. These are dark eyewear designed to be worn outdoors. The dark lenses allow for a person’s vision to be unobstructed from the bright rays of the sun.

While effective against the sun, it may hinder people from a variety of other tasks. Consider using electronic devices such as smartphones and laptops. The dark lenses of the sunglasses may make it hard for people to use these devices well.

Tinted glasses are very similar to sunglasses. The colored tint applied can greatly help to shield a person’s eyes from the sun or from bright lights, in general.

In addition, people will find no difficulty in utilizing electronic devices as it won’t be too dark to see the various things on the screen. They also help to greatly reduce general eye strain when looking at a screen for too long.

Having glare on paper can also be irritating to a person’s eyes if they have light sensitivity. The tinted lenses allow for the reader to focus on the words and not be hindered by the bright lights.

When choosing lens tint for glasses, there are many colors to choose from. Is one color better than another? Do different colors have different uses? Let’s find out.

Brown lenses can help to greatly block light from a person’s eyes. Apart from this, it also boosts contrast.

Contrast is very important to eyesight. When people’s eyes have low contrast, they will be unable to differentiate between an object and the background. This most often occurs in low light situations and when there is fog or glare.

One of the most popular choices for tinted lenses is gray. This color is quite dense, meaning that it can block most light transmission.

The biggest benefit of using gray though is the fact that vision is kept at a neutral due to the fact that the tint does not skew the colors of the world. People will still be able to see objects as is.

It is a great choice for light sensitivity. It is also ideally used for driving and certain outdoor activities like cycling and running.

Choosing a rosy or red lens tint for glasses has many great benefits. For one, it also increases contrast by blocking large amounts of blue light. This is great for light sensitivity.

Apart from that, users have reported that this tint color can be worn for extended periods of time with minimum amounts of discomfort.

Other benefits include improved eyesight when driving, and reduced glare and staring when using electronic devices.

Known to effectively filter out blue light that can potentially damage your eyes after a long exposure, the yellow tint lenses are the popular choice for night driving glasses. Though there were some efforts to debunk this claim, there are also a lot that swear by it for improving their vision when driving at night.

As more blue light is filtered out, eye strain and fatigue are also significantly reduced bringing more comfort to the user.

Find the Right Lens Tint for You

Light sensitivity is no joke. Apart from causing severe discomfort, it can come at a time where it may prove fatal.

Consider wearing lens tints for your glasses to battle light sensitivity. The best thing you can do is head to a doctor and discuss with them the various color options you have.

Find the right lens tint that will work for you, and never again cower from life’s bright lights. 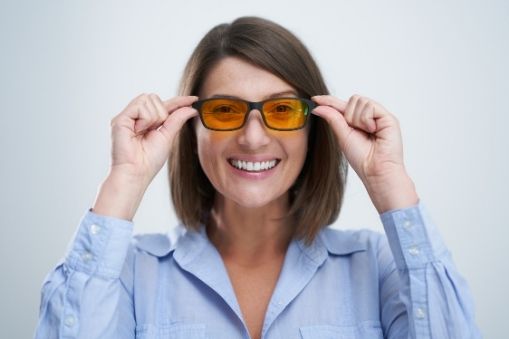 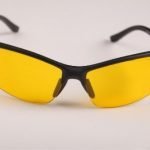 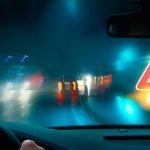 Should You Wear Night Driving Glasses? 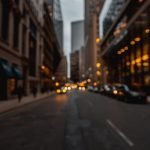 Night Blindness: Causes and How to Prevent it